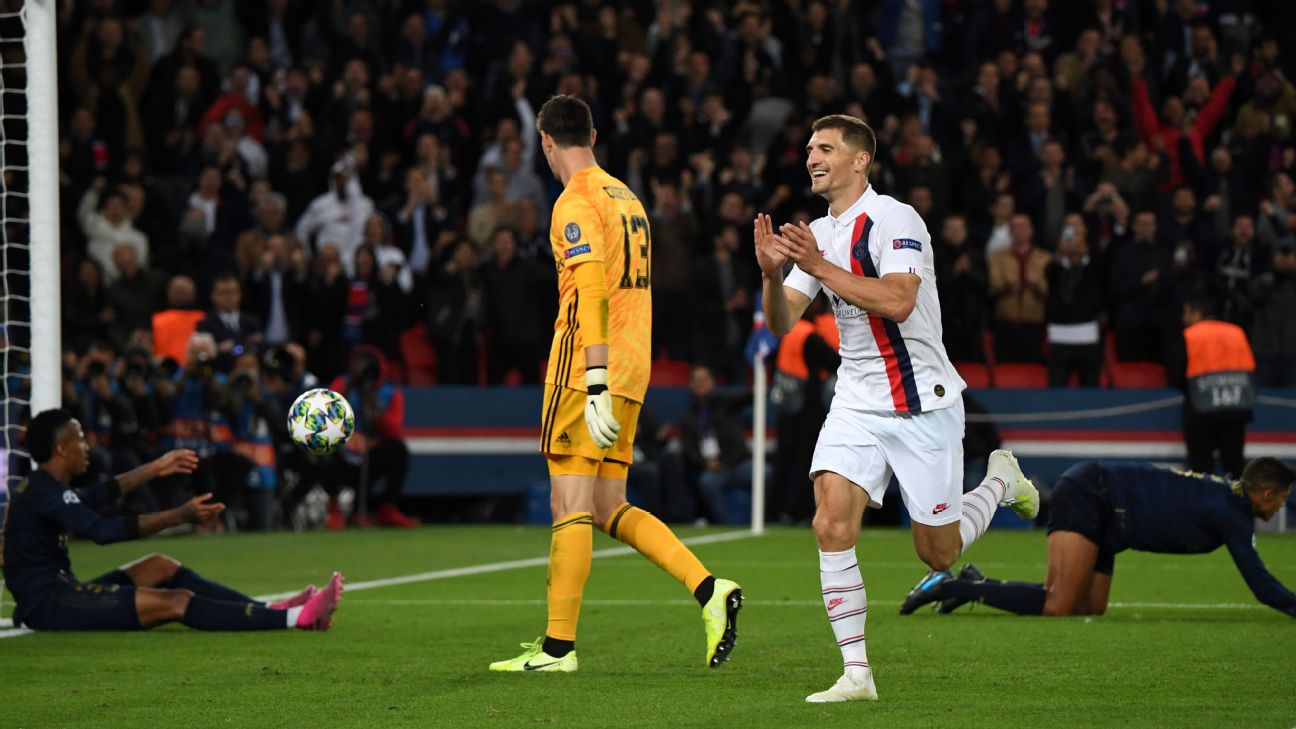 PARIS — The Spanish team had more Frenchmen (three) than the French team (one). The French team had more Spaniards (two) than the Spanish team (one). Real Madrid’s dark-hued kit looked, at least from a distance, like Paris Saint-Germain’s home outfit, and if you removed the vertical red-blue stripe then PSG’s retro uniform — harking back to the 1980s salad days of Safet Susic — appeared to the untrained eye a knock-off of Madrid’s iconic meringue get-up.

All of which was somehow fitting in a match where Topsy met Turvy, only to be outdone by a result — 3-0 to the hosts — that was even more unlikely.

Without their first-choice forward trio of Neymar, Kylian Mbappe and Edinson Cavani; with Presnel Kimpembe, who might be a World Cup winner but had played 20 minutes of competitive football since May at centre-back; with the much-maligned Thomas Meunier at right-back; with Eric Maxim Choupo-Moting the first substitute off the bench; PSG nonetheless road-graded Real Madrid.

Were there mitigating factors for Zinedine Zidane’s team?

Sure. Sergio Ramos was suspended; Luka Modric and Marcelo were injured. And if you fully drink the Kool-Aid you will also point to the unavailability of Nacho, Federico Valverde, Isco and Marco Asensio. Except guess what? Other than Ramos and Marcelo, none of the others were assured a start. Not even Modric who, lest we forget, is 34 and coming off arguably his worst season at the Bernabeu.

Moreover, when it came to the absentee list, PSG could more than match their opponents, just as they could in the “short-on-match-fitness” department. I will see your Ferland Mendy and Eden Hazard and raise you a Kimpembe and a Mauro Icardi.

Maybe it is not surprising that Zinedine Zidane did not look for excuses after his side’s defeat: “They were better than us at everything in every aspect of the game, they fully deserved to win,” he said, his great stone-face looking as if he was about to morph into The Thing’s little brother.

For the neutral, the most-hyped clash of the Champions League group stage’s Matchday 1 did not really suffer from the absence of the aforementioned stars. Not in terms of entertainment and big-game atmosphere, anyway.

The customary red carpet throng at the arrival of the PSG team bus did not seem to care that Pablo Sarabia, until recently probably less well-known than Pablo Neruda in this arrondissement of Paris, was impersonating Neymar. Nor did fans mind that Icardi, with fewer than 30 minutes of organized football — including friendlies — since May, was tasked with doing his Mbappe routine.

The Virage Auteuil Ultras did their bit, first corporate-style with their giant plastic choreography, then old school with classic pyro, and it seemed as if PSG’s players wanted to reward their support from the opening minutes.

Each of their goals told a story about both teams. The 14th-minute opener caught Madrid’s defence flat-footed and Thibaut Courtois was a smidge slow as Juan Bernat found Angel Di Maria, who sliced across the back line to score against his former club.

Nineteen minutes later, his second was a thing of beauty: A sweetly-hit drive from the edge of the penalty area that was made possible by the tissue-like consistency of Madrid’s midfield.

The third, scored in second-half stoppage time, came from a counter-attack that was originated by Di Maria and concluded by Bernat and scorer Meunier, full-backs living a dream.

PSG manager Thomas Tuchel can draw strength in so many ways from his night, which was as perfect as the blue Parisian sky before kickoff. His side scored three and created at least twice as many clear-cut chances. It was not just Di Maria either, even if he did seem to have time-traveled from the spring of 2014, when he dragged Real Madrid to the Champions’ League crown,

Marquinhos was in beast mode, while Idrissa Gueye went box-to-box with more purpose and intelligence in 90 minutes than in three years at Everton, where he was mostly a destroyer. And maybe some egos of those who didn’t play — OK, we’re talking mostly about Neymar, who watched with Mbappe in a Parc des Princes executive box — will be checked a little. This team is better with him, sure, but it can thrive without him.

As for Madrid, Zidane looked genuinely perplexed, especially after the impressive first half against Levante at the weekend.

Gareth Bale flickered into life on a couple of occasions, had a Puskas Award-contending goal correctly struck off by VAR and sent a few shots wide of the post before disappearing into mannequin mode. On the other flank, Hazard looked like a foreign object in his first competitive start for the club.

Madrid’s midfield was badly overrun, in part because James Rodriguez is not a central midfielder and in part because Toni Kroos cannot sit alongside Casemiro against opposition of this quality and be expected to contribute.

Chickens are coming home to roost after a summer transfer campaign that left more questions than answers, with guys who were being pushed out the door — James and Bale — suddenly finding themselves as regulars.

“What annoyed me most though was our lack of intensity,” Zidane said. “I’m not worried about the defense or the midfield. I’m worried about my team not having the right intensity for this level.”

The thing is, with Bale and Hazard in your front three and Kroos doing double defensive duty, intensity will be hard to come by. Equally, for all the quality on the pitch, Madrid created little, apart from Bale’s cameos and a disallowed Karim Benzema effort.

“I didn’t like that,” Zidane said. “Not creating with the quality of the players we have on the pitch… wow, that was a strange and uncomfortable feeling. I didn’t like it. It normally doesn’t happen given who we have out there.”

There is an irony in that last statement. The two front lines were — perhaps understandably — a disjointed jumble, partly because they included newcomers, partly because they have not yet had a chance to build chemistry and cohesion. But there was no mistaking which of the teams had the most quality… on paper. And they were the ones who got thrashed.

Maybe the kits were not as wrong way around as they appeared after all.