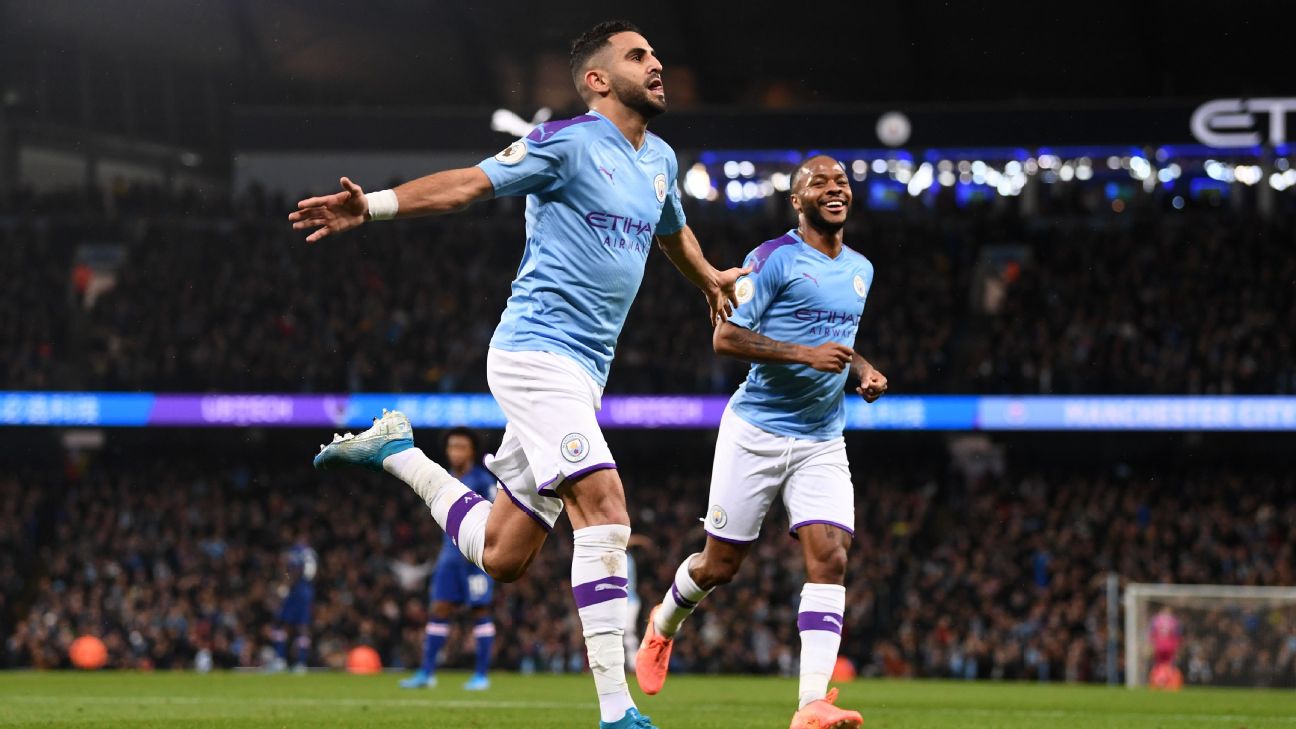 Manchester City picked up a vital 2-1 win against Chelsea to prevent themselves falling further behind Liverpool in the Premier League title race.

Things didn’t look good for Pep Guardiola’s side when they went down in the 29th minute from an N’Golo Kante goal. However, first half goals from Kevin de Bruyne and Riyad Mahrez were enough for the reigning champions to take the three points needed to jump above their opponents.

Having gone behind, City were able to turn things around quickly once Kevin de Bruyne levelled. They were able to control long periods of the game, especially in the second half. Guardiola will likely have been satisfied by his side’s pressing game.

Tammy Abraham was able to win the ball and bring his teammates into the game too easily at times. On a defensive note, Chelsea threatened with balls played between Fernandinho and Benjamin Mendy during the first half. The clinical touch City show so often was also lacking at times.

7 – Whatever Guardiola said at half time worked well, as City looked a lot more dominant during the second period of play than they had in the first. He’ll know his side can’t afford too many more slow starts if they’re to catch Liverpool in the title race.

GK Ederson, 6 — There wasn’t much Ederson could do for Kante’s goal. Aside from that, he was his usual confident self with the ball at his feet, though he got lucky when Michy Batshuayi‘s block from his pass went wide.

DF Joao Cancelo, 6 — His battle with Christian Pulisic was an intriguing one, which he just about came out on top in despite looking stretched at times.

DF John Stones, 7 — The Englishman looked very confident throughout. He was particularly effective when stepping out from the back, both with the ball and when winning it back.

DF Fernandinho, 6 — Made some important interventions throughout the game, including a block from Kante’s second half shot.

DF Benjamin Mendy, 5 — He hadn’t played in any of City’s last three Premier League games and it showed at times, as he had a very slow first half that was heavily punctuated with sloppy play. He did improve in the second half.

MF Rodrigo, 7 – He was composed in his general play and made some important tackles. Frustratingly, he was forced off just after the 50-minute mark.

MF David Silva, 6 – Used his intelligence to get into positions where he could impact the game. There were times where he struggled to make the final pass before being taken off in the 67th minute.

MF Kevin De Bruyne, 7 — His scored an equaliser that came when City were really struggling. He came close to scoring another with a late strike.

FC Riyad Mahrez, 7 – The winger struggled to make an impact in the early stages, but he made up for that with a brilliant solo goal to give City a 2-1 lead. Can count himself unlucky not to have added a second.

FW Sergio Aguero, 6 — The ESPN FC 100’s No. 1 striker in  was uncharacteristically wasteful in front of goal. He let Kepa Arrizabalaga off the hook by hitting the bar after the goalkeeper had given him the ball. Did provide some good link up play, but was taken off after sustaining an injury.

FW Raheem Sterling, 6 — He didn’t see much of the ball, especially in the first half, but the No. 1 winger in the ESPN FC 100 came into the game a bit more during the second period, but was robbed of a late goal by VAR. overall, quiet by his standards.

Ilkay Gundogan, 6 — Offered a very convincing performance after coming on for Rodrigo. He fulfilled his defensive duties well and got on the ball with confidence, even in tight spaces.

Phil Foden, 6 — He was very lively after replacing David Silva. The teenager had a couple of shots but they were very tame, and didn’t threaten.

Gabriel Jesus, NR — Came on after 77 minutes and didn’t have too many chances to make an impact on the game.