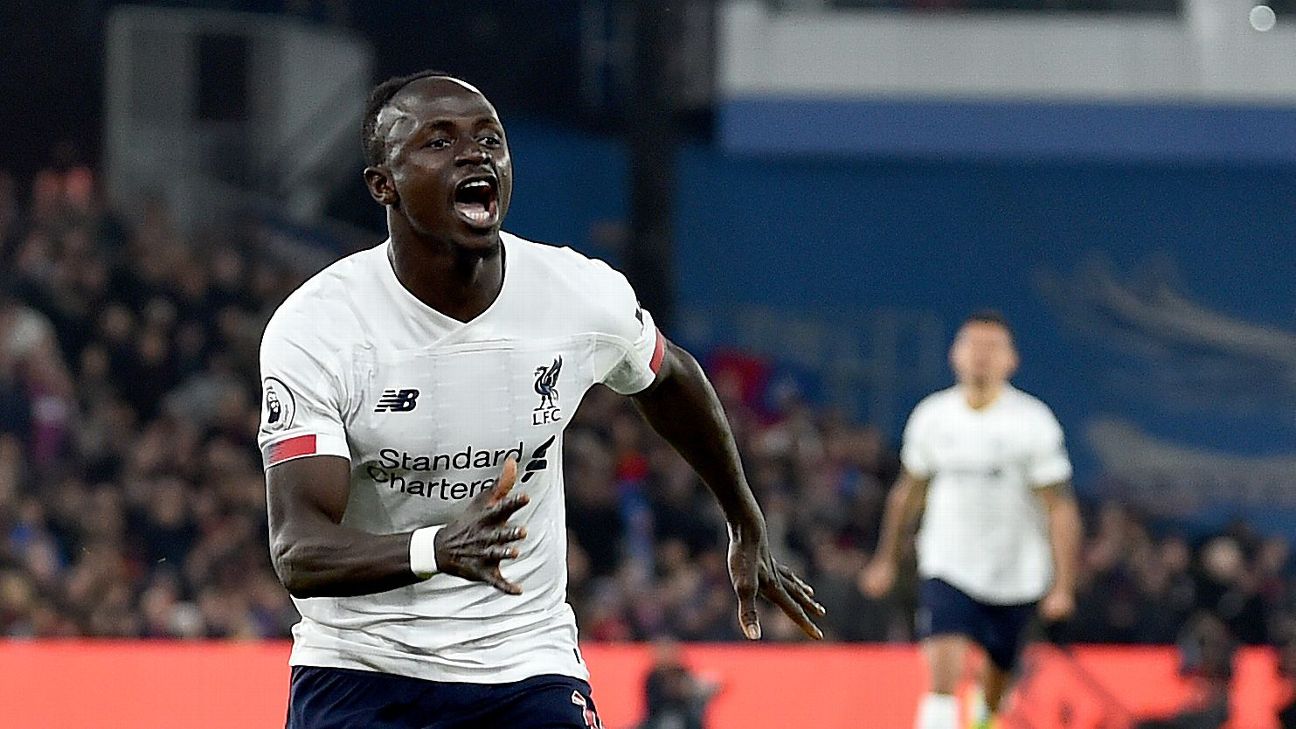 Liverpool survived another big scare as Roberto Firmino‘s late strike saw Jurgen Klopp’s side edge past Crystal Palace with a 2-1 win at Selhurst Park. The hosts thought they’d taken the lead through James Tomkins header just before the break, but VAR intervened before Sadio Mane, voted the No. 2 winger in the ESPN FC 100, bundled home the opening goal shortly after the restart.

Wilfried Zaha‘s late strike looked to have earned his side a draw, but the Reds hit back almost immediately to snatch all three points and stay eight points clear at the top of the table.

Liverpool started strongly and contained Palace within their own half for the vast majority of the opening 10 minutes. Even when below their best, Klopp’s men always seem to find a way to win. Victory over Palace made it 30 Premier League games unbeaten, whilst the visitors have now scored in every single league game this season.

Palace have proven to be tricky customers in recent weeks and could have snatched an early lead, with Jordan Ayew and Zaha proving particularly troublesome for the Liverpool back four on multiple occasions. The Reds failed to produce a single shot on target in the first half and were almost punished for conceding a series of avoidable set pieces at the other end.

6 – Fresh from a week in Cape Town, the Liverpool boss probably won’t have been too excited about facing a stubborn Crystal Palace side on a gloomy afternoon at Selhurst Park. His side weren’t at their best, but Champions always find a way to win and the German will be pleased with his sides response to conceding.

GK Alisson, 7 — Despite the Liverpool back four looking vulnerable at times, the Brazilian didn’t have too much to do in the opening 45 minutes where his involvement was limited to a single routine stop. Reacted quickly to beat away Andros Townsend‘s thunderous strike early in the second half and produced another smart stop shortly after to keep out Luka Milivojevic‘s piledriver.

DF Trent Alexander-Arnold, 5 — On a mild afternoon in the capital, the young defender looked like he was suffering from cold feet in a poor display. The full-back conceded a cheap corner with a wild and wayward back pass under pressure from Patrick van Aanholt. VAR spared him further blushes when he fouled Zaha unnecessarily, but Tomkins’ header from the resulting free kick was ruled out.

DF Dejan Lovren, 5 — Looked a little shaky at the back. Displayed a lack of awareness as Ayew found it all to easy to carve a substantial gap between the Croatian and right-back Alexander-Arnold. Also guilty of giving Christian Benteke too much room to fire an acrobatic effort at goal.

DF Virgil van Dijk, 6 — The Dutchman’s commanding presence again proved vital. The towering defender, who was voted No. 1 central defender in the ESPN FC 100, proved too strong for Ayew as the busy forward looked to hold the ball up and craft a dangerous opportunity for his side. Van Dijk was ice-cool again shortly after to calmly scoop away a low cross from the right.

DF Andrew Robertson, 6 — The Liverpool left-back, who was voted No. 1 in his position in the ESPN FC 100, has more assists than a host of attacking superstars including ex-Red Luis Suarez this season, and he came close to another with a teasing low cross towards Firmino that earned his side a corner. Robertson will have been especially relieved to see Firmino’s late strike nestle in the corner after he could have done more to shut out Zaha’s well-taken equaliser.

MF Jordan Henderson, 7 — Endured a quiet first-half on the whole, but showed the right idea as he looked to slip send Alexander-Arnold on his way down the right just before half-time, but his attempted pass was slightly over-hit. Linked up well with Mane in the opening minutes of the second half, and provided his defenders some vital protection against a spirited Palace attack.

MF Fabinho, 6 — Floated a superb perfectly-weighted ball over the top into the path of Mane as Liverpool threatened on the 17-minute mark, but the Senegal striker couldn’t quite get it under control. Picked up a yellow card after the break which will see him miss next week’s clash against Brighton.

MF Georginio Wijnaldum, 6 — Nothing out of the ordinary on this occasion, but he produced a steady display in midfield on a testing afternoon for the visitors. Could — and maybe should — have put the game to bed in the 95th minute, but his tame strike was comfortably saved by Vicente Guaita

FW Alex Oxlade-Chamberlain, 6 — Replaced Mo Salah in the Liverpool attack but failed to hit the heights he reached for his country during the international break. The 26-year-old started brightly, but his level of involvement decreased as the game progressed and he was replaced by Divock Origi in the 64th minute.

FW Roberto Firmino, 7 — Hardly touched the ball prior to the interval, but the Brazil forward was much more involved in the second half. Missed a golden opportunity to double his side’s lead with as toe-poked effort towards the far post that was excellently saved by Guaita. He kept working until the very end and produced the match-winning moment with a calm finish in the box — his first goal since September — after Palace failed to clear a corner.

FW Sadio Mane, 8 — Was a little wasteful at times, just about letting Fabinho’s excellent pass escape his reach before firing wide just after the break. Despite that, there’s no doubting his importance to this Liverpool side, and he somehow bundled home his 12th of the season with a scuffed effort that eventually found the net via both posts and the fingertips of Guaita’s right glove.

FW Divock Origi, 6 — Replaced Oxlade-Chamberlain in the 64th minute. Didn’t have too much impact, but received a bang in the back from Martin Kelly almost immediately after coming on which left the striker needing some medical attention.

DF Joe Gomes, NR — Replaced Firmino in the 89th minute and put in a battling display in his the short amount of time he was on the pitch. A good response after an eventful week representing his country.

MF James Milner, NR — Replaced Henderson in the 79th minute. Didn’t really have time to stamp his authority on the game against an impressive Palace side, but helped his team over the line nonetheless.