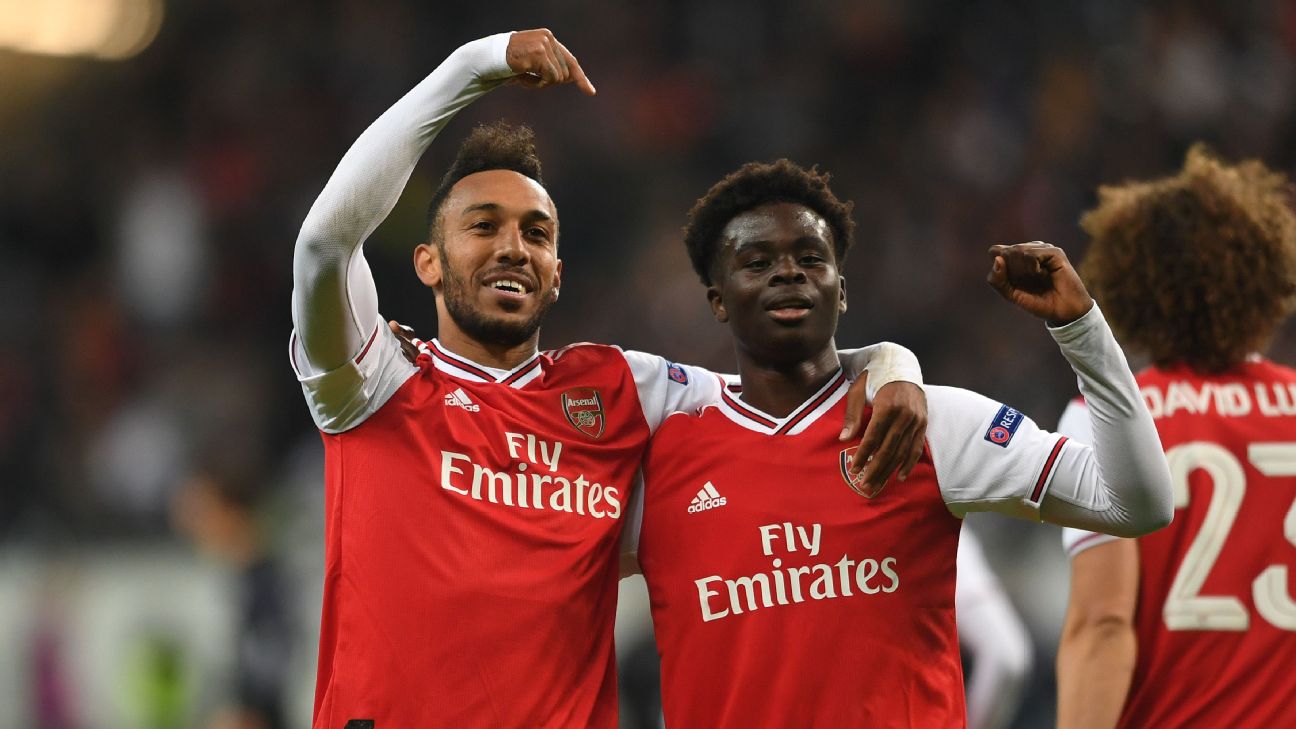 Arsenal survived an uncomfortable first half to emerge comfortable 3-0 victors against a wasteful Eintracht Frankfurt side in their Europa League group-stage opener on Thursday.

Two of Arsenal’s youngsters combined for the opener, and the performances of Joe Willock and Bukayo Saka will provide plenty of encouragement for fans and management alike. It was also a welcome return to form for Shkodran Mustafi, who was making his first appearance of the season at the heart of the Gunners defence.

The visitors were a huge threat going forward, but had nowhere near enough defensive nous in midfield to keep the game under control. A lack of shape caused the match to stretch early on, and if it weren’t for some poor Frankfurt finishing, Arsenal could have found themselves in trouble.

8 — Unai Emery chose the right time to bring Mustafi back into the fold, and was rewarded with a solid display, while his continued use of youngsters is really starting to bear fruit.

GK Emiliano Martinez, 7 — The Argentine had a busy first half that saw him make a host of decent stops, and surprisingly had a lot less to do in the second as Eintracht failed to make much of an impression as an attacking force.

DF Calum Chambers, 6 — Arsenal’s right-back had a tough first half against the tricky Filip Kostic, but the 24-year-old improved in the second half and forced the Serbian into defensive work that ultimately negated his attacking threat. Booked for holding back Kostic as Eintracht looked to counter.

DF Shkodran Mustafi, 7 — Can find himself on the wrong end of flak at times, but this was an assured display on his return to Emery’s side. The German will have done his chances of a Premier League return no harm at all here.

DF David Luiz, 6 — Had his occasional moments of uncertainty against the physical Bas Dost and the clever movement of Andre Silva, but never found himself in a great deal of danger.

DF Sead Kolasinac, 6 — The Bosnian was the more defensively assured of Arsenal’s full-backs, dealing well with the threat of Eintracht wing-back Danny da Costa, but was desperately short of quality with his final ball going forward. Booked for time wasting before being subbed off for Ainsley Maitland-Niles in the final 10 minutes.

MF Granit Xhaka, 6 — Almost found the net in brilliant fashion with a looping free kick that caught everyone by surprise, but the Gunners’ skipper still needs to do more when his side are out of possession.

MF Joe Willock, 8 — Benefited from a huge deflection to put his side ahead not long before half-time, but deserved his slice of luck thanks to an excellent display of ball carrying and distribution. Unfortunate to be subbed off for Dani Ceballos with 20 minutes to go.

MF Lucas Torreira, 6 — Fluffed his lines with the goal at his mercy early on, and the Uruguayan doesn’t look suited to a midfield role that sees him operate on the right of a three. Needs bodies around him if he’s going to be effective in this system.

FW Emile Smith-Rowe, 5 — Should have scored when put through on goal just after the half-hour mark, and the youngster will be disappointed he couldn’t grab his chance in the side with both hands. Moments of naivety and sloppiness in possession fortunately went unpunished. Subbed off for Nicolas Pepe after an hour.

FW Bukayo Saka, 8 — Good work from the 18-year-old released Willock for Arsenal’s opener, before he found space on the edge of the penalty area and fired an excellent finish past Kevin Trapp to make it 2-0. An assist for Arsenal’s third was the cherry on top of a superb performance.

FW Pierre-Emerick Aubameyang, 6 — The main man for Arsenal was shackled well by the Eintracht backline, but found the net in the dying embers with a simple finish.

FW Nicolas Pepe, 5 — The Ivorian failed to make an impression in his half-hour cameo.

MF Dani Ceballos, N/R — No impact from the Spaniard.

DF Ainsley Maitland-Niles, N/R — Slotted into the Arsenal defence for the closing stages.