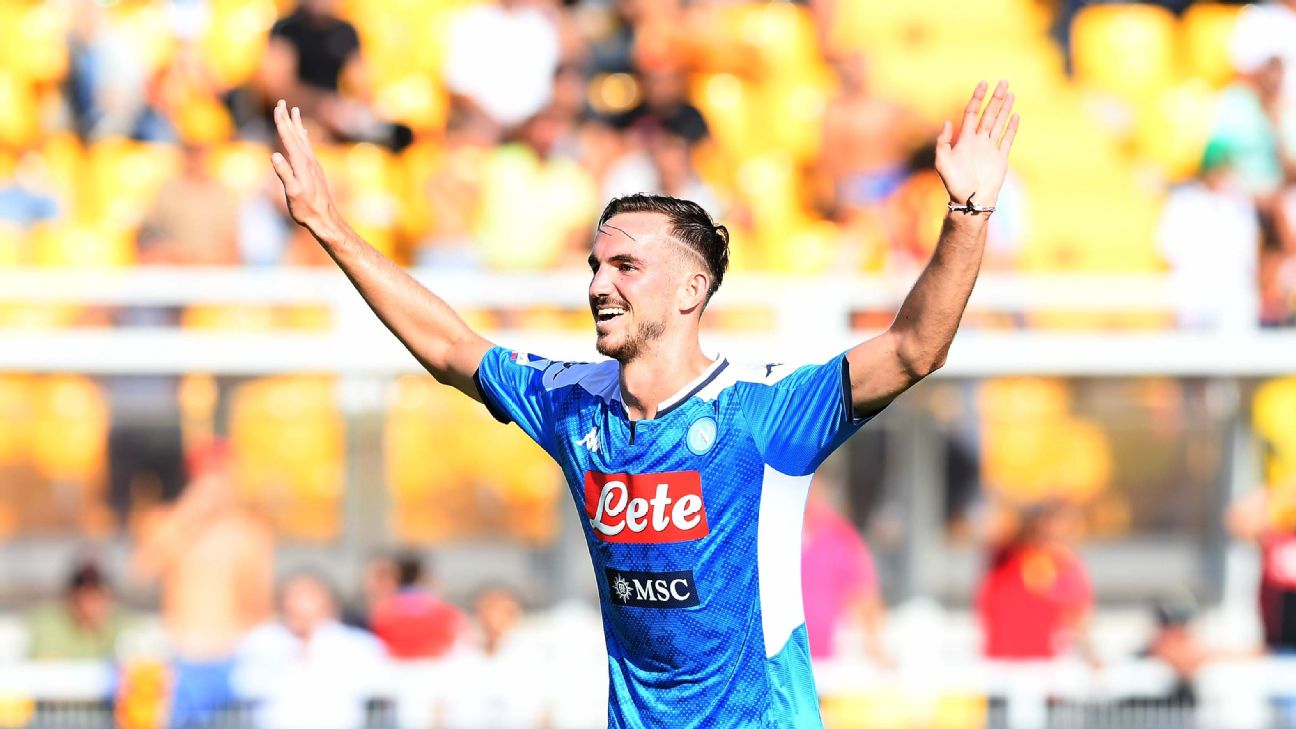 Five rounds into the 2019-20 Serie A season, we thought it would be fun to highlight the players who have really caught the eye so far. You’ll be aware of some but others will come as a surprise.

When Bayern ungraciously sacked Carlo Ancelotti, his son and assistant Davide went to live with his Andalucian girlfriend in Seville. While over there, he developed a football crush on a Betis midfielder.

“I fell in love with Fabian,” he explained, “so when we met [Napoli and] sporting director Cristiano Giuntoli, we immediately got talking about him.”

Ruiz almost immediately imposed himself at Napoli and Ancelotti’s desire to develop him and Piotr Zielinski culminated in the decision to move on from captain and all-time top scorer, Marek Hamsik. As with Zielinski and new signing Elif Elmas, you can’t limit Fabian to one position. He can do it all and it’s not uncommon to see him play three roles over the course of a single game. Ancelotti loves to use him and Zielinski out wide, with the brief of coming inside and playing in the half-spaces as Napoli’s full-backs fly forward.

– Robson: Inter’s title hopes rest on Lukaku
– Schoenfeld: Sancho will be a star… on his terms
– Carlisle: Should we be worried about Pulisic at Chelsea?

A star of the Under-21 side that won the Euros in Italy over the summer, Fabian was watched by Barcelona’s Eric Abidal in the 4-1 win against Lecce, a game in which he probably deserved the Man of the Match award ahead of Fernando Llorente, who scored a brace and won a penalty. As time passes and the profile of interest grows, you realise just what a coup it was for Napoli to acquire him in 2018.

Inter’s former owner, Massimo Moratti, says Sensi reminds him of Wesley Sneijder and it’s hard to think of an Inter midfielder who has made so big an instant an impact since 2010.

The 24-year-old impressed at Sassuolo last season and it felt overdue. Signed from Cesena in 2016 and billed as the next Marco Verratti, it wasn’t until his third Serie A campaign that he began delivering on his potential. His coach, Roberto de Zerbi, deserves great credit for that, to say nothing of pushing him higher up the pitch in the second half of last season after initially using him to serve as a screen in front of the defence.

While Sensi nominally starts on the left side of Inter’s midfield trio, he’s constantly taking up space between the lines and wreaking havoc. In fact, the alternative system Conte has come up with deploys Sensi and Matteo Politano just off Romelu Lukaku. Only Luis Alberto and Suso have completed more passes in the final third this season but Sensi’s dynamism and penetration has stood out above that of his peers.

Unfazed by the greater expectation and responsibility that comes with moving to a big club, he has raised his game at Inter showing real force of personality. Sensi looks like he’s been playing at this level for years. On the scoresheet in each of his first two league appearance at San Siro, the Sneijder comparison makes sense given his ability from free-kicks. More impressive was how he got the winner at home to Udinese, with a smart run and a header despite being the smallest guy on the pitch at 5-foot-6.

At the moment it feels like there’s nothing he can’t do.

On his way out in the summer, Francesco Totti suggested Roma’s owners wanted rid of the team’s Roman players. The claim did not hold up to scrutiny. Alessandro Florenzi got the captain’s armband and Lorenzo Pellegrini wants to succeed him.

Pellegrini, 23, is in a state of grace at the minute, lighting up the league in the No.10 role Totti will forever be associated with. His set-piece delivery was already up there with the best in Serie A. But his passing — the back-to-goal, round-the-corner releases so reminiscent of Totti — has been mouthwatering. Pellegrini had a hat-trick of assists in the 4-2 win against Sassuolo and crossed for Edin Dzeko‘s stoppage time winner against Bologna at the weekend. Equally, his influence between the lines has made Roma a delight to watch in attack under Paulo Fonseca.

The 23-year-old scored Italy’s go-ahead goal against Armenia in the last international break and Roberto Mancini now has a tough decision to make. After settling on a midfield of Nicolo Barella, Jorginho and Verratti, how does he keep Pellegrini and Sensi out?

Handanovic is 35 and has only played in the Champions League group stages for the past two seasons. It makes you wonder: if he hadn’t joined Inter in 2012, when the long and painful transition from the treble team began in earnest, he would have perhaps gained greater acclaim outside of Italy.

Inter have conceded just once this season. They have the best defence in Europe’s top five leagues. Playing behind a back three of Diego Godin, Stefan de Vrij and Milan Skriniar helps, of course — Inter’s opponents have often been limited to shots from distance — but Handanovic has prevented more goals [1.62] than any of his peers this season and was Man of the Match in the 1-0 win against Lazio making three brilliant saves in the first half.

The current goalkeeping class in Serie A is of an excellent standard. Beyond the long in the tooth (Handanovic and Salvatore Sirigu), the Poles (Wojciech Szczesny, Lukasz Skorupski, Bartlomiej Dragowski), the ballers (Pau Lopez) and the new generation (Gianluigi Donnarumma, Alex Meret and Pierluigi Gollini), there are shot-stoppers like Juan Musso, whose saves on Alexis Sanchez and Mariusz Stepinski are as good as any you’ll see around Europe this season, Andrea Consigli, who have saved more penalties than any other keeper in the top five leagues in 2019, and Thomas Strakosha, who continues to fly under the radar.

For Handanovic to still stand out in that crowd is quite something.

Berardi’s 16-minute, first-half hat-trick against Sampdoria was his first since May 2015 when he haunted Milan with another frightening display of his talent. The 25-year-old made headlines around the world the previous year when he effectively sent the Rossoneri into the dark ages, hitting four goals in one game and provoking Silvio Berlusconi into the dismissal of Massimiliano Allegri. Milan have never been the same since.

The hype generated by Berardi in his first two seasons in the league has died down a bit. After reaching 30 Serie A goals quicker than Roberto Mancini, Antonio Cassano, Francesco Totti, Alessandro Del Piero and Roberto Baggio, he faded. Injuries played a part, as did the reluctance to leave his comfort zone and join a big club when he had the opportunity. Too timid for his own good, it felt like his development stunted. His mentor, Eusebio Di Francesco, left and Sassuolo had a traumatic transition year before appointing Roberto de Zerbi, whose style always promised to rekindle the Berardi of old.

Top of the scoring charts at the moment (check out his free-kick against Roma) it’s not the first time the Calabrese has come out of the blocks firing only to burn out or suffer a momentum-checking knock. Still, this feels like it could be the year Berardi rediscovers the form that led a number of Serie A watchers to proclaim him Italy’s biggest talent.

Berardi is still only one of four players born after 1994 to have scored 50 or more goals in one of Europe’s top five leagues. The others are Kylian Mbappe, Raheem Sterling and Timo Werner.

When Castrovilli was named in Fiorentina’s team for the season opener against Napoli along with other fresh faces from the club’s youth set-up, Lorenzo Venuti and Riccardo Sottil, it appeared to reflect a couple of things. The transfer market was still open and Vincenzo Montella didn’t have a complete team. He was filling the holes in his side with kids.

While Venuti and Sottil have since dropped to the bench, Castrovilli has started every game in midfield. The 22-year-old has been a revelation, taking the place of last season’s top scorer Marco Benassi, and he’ll likely be called up to Roberto Mancini’s next Italy squad. Four top-flight clubs inquired about taking him off Fiorentina’s hands in the summer after an encouraging loan spell with second division Cremonese. Impressed by what he saw in the first days of training camp in Moena, Vincenzo Montella vetoed Castrovilli’s exit.

Castrovilli breaks the lines not with passes, but dribbles, and it’s curious to see a central midfielder so high in the take-on charts. Only wingers like Riccardo Orsolini (31) and Gervinho (26) have won more 1 vs. 1s this season in Serie A.

Montella has compared him with 1982 World Cup winner, Giancarlo Antognoni, a legend in Florence and the biggest compliment any Viola midfielder can hope to receive. “Maybe that’s a bit over the top,” Montella acknowledged. He can be forgiven for getting carried away.