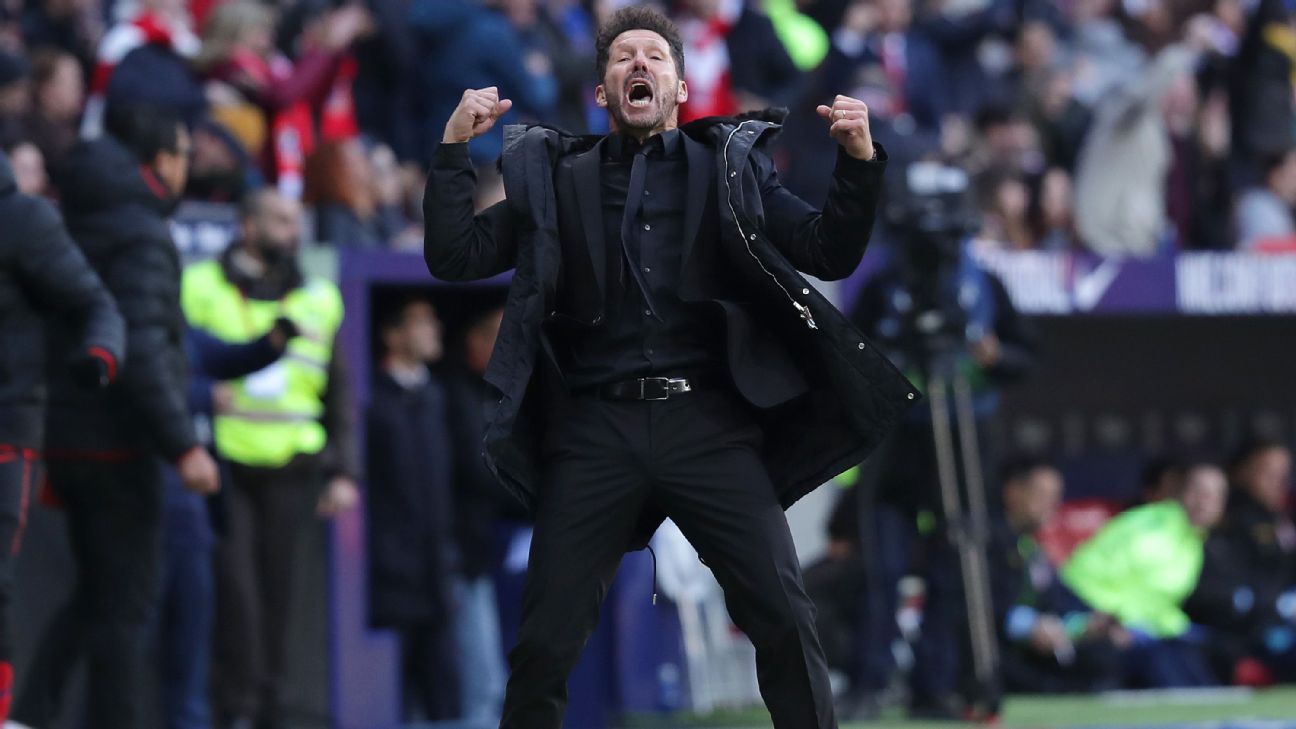 One day when Diego Simeone was young, about 10, a music teacher by the name of Bruno Amasino made him conductor of the school orchestra. Simeone had said that he never really knew why, but watch the Atletico Madrid manager on the touchline at the Wanda Metropolitano and its easy enough to imagine.

Much more than a coach, there is he is, this man in black, unable to sit still, arms waving frantically, heart racing, directing everyone. And “everyone” really is everyone; not just the players, but the fans too, maybe even more so, thousands taking their lead from him, following his every instruction. Some things never change.

Or perhaps, for the first time, they do? For perhaps the first time since he took over Atletico and revolutionised the place, changing everything, including what was demanded of him, changing the conditions through which he would be judged, there are doubts. Sometimes, with some substitutions, they are expressed in whistles; timid, it is true, and temporary too. Other times, it is expressed as a kind of murmur creeping around the ground. And then, on occasion, there’s a kind of stillness. Worse, when Atletico conceded to Valencia not so long ago, some stood, turned, and made for the exits, defeated.

Now, make no mistake: Just about every Atletico supporter would still follow Simeone to end of the world and few in the media have turned on him, but maybe some would not follow him back any more. Or would at least wonder why, and where this long walk will take them. Doubts are raised, identities questioned: who Atletico are and who Atletico should be, whether the man who led the revolution can lead an evolution. Where do they go from here, what they will become? This season is the beginning of a new, uncertain era.

With half of the staring XI gone, the old guard departing, that was inevitable. The new guard too: Simeone says that, rather than Diego Godin, Filipe Luis, Juanfran or Antoine Griezmann, the departure that did the most damage was Lucas Hernandez; one of their own, a youth teamer set to lead them in the future.

It was always going to be difficult — even if the players who arrived brought optimism — and that too, tellingly, is a message Simeone has repeated. They also brought an expectation that this would be different. Maybe even an obligation. They got used to success, grew and sought more. No longer a miracle, but a target. And not just success, but a style too.

And there, Simeone has the spotlight shone on him, the glare harsher than before. There too, he rebels. To judge by some of what Simeone has said this season, and how often he has said it, he certainly seems to think that there are those no longer so keen to follow him, although he has tended to turn that discourse on those outside, and external enemies have always been a useful tool, a means to unity. Increasingly, he has argued that his way has always been Atletico’s way. Yet the more he argues that the club is immutable, tracing footballing roots through time, the more it underlines that some wonder if it might mutate.

If it should, in fact.

Or, maybe, if it already has: unintended, uncontrolled.

“We can’t leave our path,” Simeone said during an interview with El Larguero radio show in October, an interview that became a message, almost a call for arms. “Historically, we have always been hard-workers, counter-attack; we cannot let anyone divert us from that path. Every time we have left that path, [there have been] problems. Barcelona have a style and are not going to change, we have our style, others don’t. We need tranquility.”

“Don’t let them confuse us,” he said. Four times.

Which was when, perhaps, some childhood memory came to him. Simeone has said that when he was a kid, Sunday nights were his favorite moment of the week because it meant Diego Maradona on the TV and pizza on the table.

“We like pizza,” he said on El Larguero. “We eat pizza; don’t eat anything else.”

In other words, do not ask for something else — something flasher, posher, more refined — from Atletico. Do not ask for more: This is us. The problem is that pizza is great, but sometimes you want something else. Pizza is great, but what have you got on it? With Atletico’s outlay — Joao Felix alone cost €126 million — the cost of this side, the place they now call home, people do ask for more. They do ask if this team should still do what that team did, or should be different.

Simeone has created conditions in which demands grow, normalizing a success that was unthinkable, sparking growth that was unthinkable too. By winning La Liga and reaching two Champions League finals, he gave them more than they could ever have imagined, so human nature asks for more and this season especially.

Given how Real Madrid and Sunday’s opponents Barcelona started the season, Atletico may never have had a better chance to compete for the league, including 2013-14, when they actually won the league. They could have opened up a gap. Instead, they are fourth, trailing the top two by three points, having played a game more. In Europe, their passage to the next round of the Champions League is not yet secure. They have won just five of their last 15 games and have not won in six away from home.

Atletico have lost just once all season but there have been too many draws, which reinforces that sense that they are neither one thing nor the other. At least not yet. Or that Simeone lacks something, at least with this team; that making pizzas is fine, but can he rustle up another dish? And, anyway, is this pizza as good as it was? These new ingredients do not work so well.

They don’t have the creativity that might come with embracing a new, more expansive identity — just 16 league goals say much — but nor do the numbers express the security of old, where a single goal meant a win and a lead was a victory: 1-1 draws against Granada, Sevilla, Alaves and Valencia. Something shifted in the atmosphere too. “Simeone, no longer untouchable,” one headline said, if prematurely.

There have been moments when Simeone has hinted at problems, when warnings have been issued, a lingering suggestion that some players (and others beyond the dressing room?) may not follow him as willingly as they once did, exposing those whose enthusiasm for work, his work, flagged. A sense that he felt that the professional culture needed reinforcement, humility reinstated. Maybe even that control, his control, needed to be reestablished; a reflection perhaps of some waning power.

Take this slightly oblique line, after Atletico lost at Bayer Leverkusen earlier this month: “I love this moment,” Simeone said. “This is a good moment to work and look and see who is working hard and who is instead looking for someone to blame. Those that want to work will get on with me; those that seek someone to blame will not.”

Or this one: “Anyone who thought this season would be easy, that’s their fault for thinking that. I knew we had lots of work ahead of us.”

That night in Germany, Simeone said it was his fault, although there was a warning to his players implicit too.

“It’s up to me for them to motivated,” he said. “That is something I have to work on, to reach them more profoundly.”

No one has reached them more profoundly and whichever direction they go — evolve, return to what they were, change completely — there is nobody Atletico fans would wish to get it right more. For all that some doubts creep in, there is nobody they would like to see lead them more, no one they long to see succeed so badly. They will never forget, the gratitude will ever go away.

There may be doubts over what exactly Atletico is or what it will be, but whatever it is, it is because of the man who will stand on the touchline against Barcelona on Sunday, taking charge for a game that feels like it might decide the destination of the title, when once — before Simeone was manager — all it decided was the departure of a Fernando Torres who was all too aware that they couldn’t compete.

That man down there, dressed in black, conducting them all.