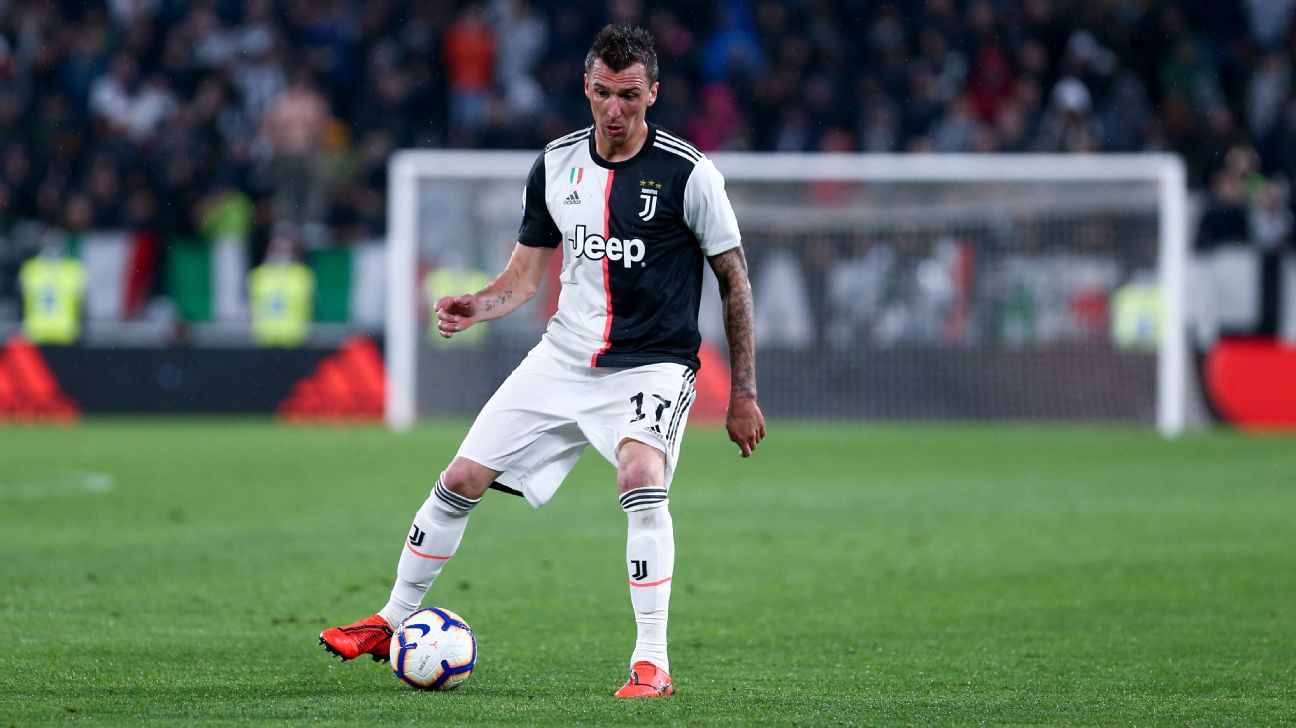 Tuttosport is reporting that Manchester United have reached a verbal agreement with Juventus over the signing of Croatian forward Mario Mandzukic.

Mandzukic, 33, has been heavily linked with a switch to Old Trafford for a few months now and almost moved in the summer transfer window. However, after that move failed to materialise, United turned their attention towards January and their form in front of goal recently has pushed them towards agreeing a deal.

The Italian outlet reports that some significant progress has been made now and Mandzukic is believed to have turned down £7 million a year offer from Al-Rayyan in Qatar in favour of sticking around in one of Europe’s top leagues. If the deal is completed then it will be confirmed on Jan. 1 and United will have another, albeit short-term, option up front.

22.55 BST: We’ll close Thursday’s live edition of Transfer Talk with some news coming out of Italy. According to Calciomercato, the emergence of Theo Hernandez at AC Milan has left Ricardo Rodriguez short of playing time, with Borussia Dortmund, Schalke and Everton all interested in signing the 27-year-old left-back.

21.38 BST: SB Nation’s Hudson River Blue has picked up a report from Romanian journalist Emanuel Rosu stating that New York City FC is attempting to sign FCSB’s 21-year-old standout Florinel Coman, whose reportedly been nicknamed “Mbappe” and has attracted the interests of Chelsea, Benfica and Sporting.

20.21 BST: Feyenoord’s Orkun Kokcu is said to be one of the finest prospects in the Eredivisie, and the Mail reports that amid interest from Arsenal, the Dutch club could be tempted to part with the 18-year-old prodigy for a fee of £20m.

19.04 BST: With Thomas Partey enjoying a fine start to Atletico Madrid’s season, Los Rojiblancos are growing wary of losing the Ghana international for the cut-rate €50m release clause in his contract, and Goal writes that the club are closing in on a new deal that would see the 26-year-old’s release clause double.

17.47 BST: Inter are preparing to make a January move for Bayern Munich’s wantaway Thomas Muller, according to Calciomercato, and will use Ivan Perisic as the makeweight. The Croatia winger has had a bright start to his loan in Bavaria, and with a €25m option to make the deal permanent, the Italian club are hopeful that Bayern will be willing to simply exchange players.

16.30 BST: In case you were wondering what Man United’s biggest issues are, we spoke to someone who should know.

15.31 BST: Earlier we said that Man United were keen on Benfica defender Ruben Dias, but now they have competition.

The Mirror says Wolverhampton Wanderers are involved, which would be a mega shock, while Manchester City are also after the 23-year-old as they are in the midst of a defensive crisis.

14.50 BST: Slightly less exciting for Man United fans, Rostov midfielder Mathias Normann is also on the radar, according to Goal.

The 22-year-old midfielder is clearly a cheaper option and he’s just become a Norway international. He’s being linked with Ole Gunnar Solskjaer having played under him at Molde in 2017 and 2018, while he’s also had a disappointing spell at Brighton on his CV.

Probably why his price is only €20m.

13.43 BST Manchester United. Young. British players… You know the story, right? Well, it’s more gossip that Leicester duo James Maddison and Ben Chilwell are on the radar. £130m is the price for the pair.

The free agent signed a two-year contract with the help of Targeted Allocation Money (TAM), with the Fire also holding club options for both 2021 and 2022. Medran will be added to the Fire’s roster in January of 2020 pending receipt of his P-1 visa and International Transfer Certificate.

12.16 BST: Jose Mourinho has turned down the opportunity to speak to Lyon over the vacant manager role, with a source having told ESPN FC he is looking for a project at a top club.

The Portuguese manager has been out of work since he was dismissed by Manchester United in December 2018 and was heavily linked with the Real Madrid job, before Zinedine Zidane returned towards the end of last season.

Lyon sacked Sylvinho on Monday, one day after a last-gasp 1-0 defeat in the fierce derby with Saint Etienne — their fourth loss in nine matches.

Zidane made public his admiration for Pogba, but Madrid were unable to meet United’s valuation. Eriksen, who hinted at a Spurs exit in the summer, is in the final year of his contract.

Injuries in midfield have hampered Madrid this season and sources said that Perez believes an offer of €30m for the Denmark international could be enough to seal the deal in January. However, Zidane still has his heart set on signing Pogba.

10.59 BST: Liverpool manager Jurgen Klopp turned down a return to Borussia Dortmund in 2018 but admitted he could go back when the club really need him, according to exerts from CEO Hans-Joachim Watzke’s biography.

The 52-year-old won two Bundesliga titles and one domestic Double during his seven years at Dortmund, while he also took the club to the 2013 Champions League final. But, four years after his departure in 2015, Klopp’s long shadow still hangs over the Westfalenstadion.

Klopp is quoted as saying in the biography: “Aki [Watzke] called me one day and told me: ‘Jurgen, you must return!’ I laughed and thought he was joking. ‘Are you stupid? Are you drunk? How would you come up with an idea like that? I am under contract at Liverpool for a few more years.

“As a saver, when the club really need me, why shouldn’t I do it? It’s just very nice that I even have the option. But I don’t think it’s incredibly likely that it happens like that.”

10.36 BST: A Bayern Munich without Thomas Muller would be “hard to imagine,” his teammate Joshua Kimmich has said.

Muller, 30, is not happy with his role on the bench at Bayern Munich this season and told kicker earlier this week that he is “too ambitious” to stay there for long. For the first time in his career, a move away from the Allianz Arena looks likely.

“It’s clear Thomas is not pleased with his situation. He wants to play. And you must say that when he’s brought in from the bench he does a very good job,” Kimmich told reporters following Germany’s 2-2 draw with Argentina. “I can understand he’s not happy after five consecutive games on the bench.

“Bayern without Thomas is hard to imagine. He is a great figure of identification, like Schweini [Bastian Schweinsteiger] or Philipp Lahm in the past and David Alaba now.”

09.56 BST: Erling Haaland isn’t the only FC Salzburg striker who is attracting attention. The Daily Mail reports that Arsenal and Crystal Palace are among the Premier League clubs keeping a close eye on South Korea forward Hwang Hee-Chan.

09.14 BST: Pep Guardiola loves Phil Foden. He’s called him the most talented player he’s ever worked with — which includes Lionel Messi by the way — and now in a serialisation of a book called ‘Pep’s City: The Making of a Superteam,’ The Sun reports the Man City boss as saying: “We didn’t give Foden a new contract by accident. He is the only player that can’t be sold under any circumstances — the only one. Not even for €500m.

“Phil’s going nowhere — Phil is City. We won’t be signing anyone else for that position. When David Silva leaves [in the summer], we know exactly who our new magician will be.”

08.30 BST: Benfica centre-back Ruben Dias has been on the radar of Manchester United, but the club are aware of this and the 26-year-old is set to be offered an improved contract.

That will push the Portugal international’s release clause to around £79mm which will either act as a deterrent or just give a big club the information they need to make a bid.

Inter Milan are eager to bring in a new midfielder during the January transfer window, Calciomercato reports.

The report states that Inter are in need of another option in midfield, especially if they’re serious about challenging Juventus for the Serie A title. Ivan Rakitic and Nemanja Matic are still believed to be the two main targets for the club, with an outside bet being Lazio’s Sergej Milinkovic-Savic.

Sandro Tonali is also in the mix but, with a few months remaining until the window opens, it appears as if there is are a lot of moving pieces for manager Antonio Conte.

City have struggled at times during the early portion of the Premier League campaign, with their defensive issues compounded by a host of injuries. However, if they’re able to lure a player like Ake to the club, it could serve as a huge sign of intent to title rivals Liverpool.

The 24-year-old has been with the Cherries since 2017, having spent six years at Chelsea. The Blues still hold first right of refusal, but are under a transfer ban and so if City are legitimately interested in a move of this nature, they’ll have to act fast.

– Jose Mourinho has rejected a return to management with Ligue 1 giants Lyon, RMC reports. The former Manchester United boss is said to have informed the club that his primary goal is to return to the Premier League as he attempts to bounce back from a disappointing tenure in charge at Old Trafford.

– Juventus are interested in trying to sign Chelsea left-back Emerson, Calciomercato reports. The 25-year-old is considered to be one of the Italian champions’ primary targets as they attempt to build up some reinforcements down their left side. Chelsea, though, could offer him a contract extension in order to deter the Old Lady.